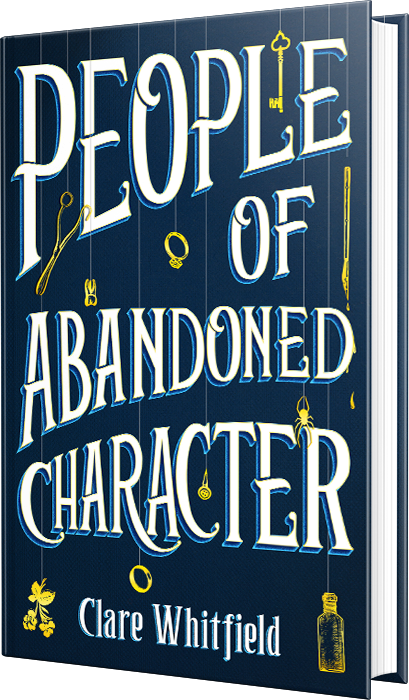 Available in the US, UK, and Australia

London, 1888: Susannah rushes into marriage to a young and wealthy surgeon. After a passionate honeymoon, she returns home with her new husband wrapped around her little finger. But then everything changes. His behaviour becomes increasingly volatile and violent. He stays out all night, returning home bloodied and full of secrets.

Lonely and frustrated, Susannah starts following the gruesome reports of a spate of murders in Whitechapel. But as the killings continue, her mind takes her down the darkest path imaginable. Every time her husband stays out late, another victim is found dead. Is it coincidence? Or is he the man they call Jack the Ripper?


“This time we get to imagine the Victorian serial killer from the point of view of his wife. Colourful Victorian streetlife meets gaslit bride.”
—Karen Robinson, The Sunday Times Crime Club

“An astonishing book set in a Victorian London plagued by Jack the Ripper. I’d be amazed if it isn’t dominating the shortlists come next year’s award season.”
—M.W. Craven, CWA Gold Dagger award-winning author of The Puppet Show

“Compelling in its portrait of Susannah as she tries to free herself.”
—Nick Rennison, The Sunday Times pick of the best historical fiction

“Far be it for me to reveal the truth, but this is a very worthwhile read which will keep you up at night. A ripping read, if you’ll excuse the pun.”
—C.K. Harrison, Amazon reader

“This book is a brilliant dark historical psychological thriller. It fully immerses you in the world of Jack the Ripper and a macabre Victorian London. A five star read.”
—Lynne Packer, Love Reading review

“What a book! Couldn’t put it down. A real page turner from start to finish. Cannot believe this is her first book. Cannot wait for the next one.”
—DD Johnson, Amazon reader

“I can’t recommend this book highly enough—as a thriller, superb historical fiction or for anyone who loves Ripperology.”
—Miriam Smith, Love Reading review

“A great read-only utterly compelling and a very different spin on the Ripper. I couldn’t put it down.”
—Rhiannon Jones, Amazon reader

“How To Breathe Fire” on The Inside Flap podcast

It would be fair to say that Whitechapel had developed into an embarrassing boil on the backside of London, which had a habit of pulling up its trousers and pretending it wasn’t there. England’s capital was the richest and most powerful city in the world, but you’d never know it going by neighbourhoods like Whitechapel. Throngs of fortuneseekers poured into London from every corner of the country and from the far reaches of the empire beyond—the Irish in a continuous dribble that ebbed and flowed, the Jews fleeing pogroms, the Chinese, the Indians, the Africans, the merchants—and the undesirables among them drifted east, to Whitechapel, like the waste sent out on the tide at Crossness. My mother too. The rich tarred us native poor of England as lazy and inept, but regardless of the truth or otherwise in that, we unfortunates had nowhere else to go and so we piled up on top of each other in the East End as if driven into a wall. If Whitechapel was the worst of London, the thirty lanes and courts of the Nichol were the worst of Whitechapel. The parishes of these parts didn’t have shitrakers, because tenants couldn’t pay, and nor could we afford lighting, so the streets were deep in foul-smelling rubbish and swilling with blood and urine from the tanneries and abattoirs. At night it was a lawless, pitch-black wilderness. The terraced buildings were dry and brittle on the outside and dank and swollen inside. They were crammed to bursting: a single terrace would have sixty or seventy residents, with every adult paying an extortionate rent as a percentage of their pathetic earnings. Many had more than one family sharing a room, with only a hung sheet to separate them. Adults and children slept naked like fish in a bucket; babies were made and waste was excreted all in the same room. Rotten staircases and ceilings collapsed and the wallpaper. rippled with vermin. Some lived in inches of filthy water in the flooded cellars, breathing in bacteria and disease. Everywhere stank, thick with the stench of sweat and shit and whatever odour came with the trade of that court’s inhabitants: phosphorus, smoked fish, meat. Windows were either black with coal dust or broken and patched up with sacking or newspaper. Not that anyone ever opened them, as the reek from outside was worse. A few years living like that and our lungs never recovered. Little wonder that reaching thirty years of age was considered an achievement. Strange to say, but the putrid terraces of the Nichol and the other Whitechapel slums were the most profitable in London. So many tenants, and so few improvements ever made. The better classes bemoaned our depravity and fecklessness and yet the buildings were owned by the very pontificating politicians, clergymen and lawmakers that professed to serve those they so despised. Such was the bleak existence I considered myself fortunate to have escaped.